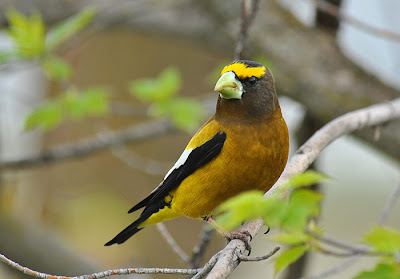 Like Red Crossbills and Pine Grosbeaks, Evening Grosbeaks (Coccothraustes vespertinus) have been described as having distinct call types that vary geographically (Sewall et al. 2004). These distinct call types also correspond approximately with subspecies that have been described based on morphology. Because of these distinct call types which correlate to geography and morphology, it has been suggested that Evening Grosbeaks may be in need of further taxonomic work, that is, that they may be candidates for future splitting. In that Sewall et al. paper, they leave northern Utah as a question mark in their map, an unsampled area between the ranges of (morphologically-defined) subspecies C. v. brooksi and C. v. warreni, where no birds were examined and no calls recorded.

Yesterday I recorded a small flock of 4-6 Evening Grosbeaks calling in the treetops above my yard in Logan, Utah. Evening Grosbeak call types are distinct enough that they can be told apart by ear, but I don't have any practice at this so I imported recordings into the software RavenLite to examine the sonograms.

Most of the calls were of Type 1. This is the call type that is given by C. v. brooksi, the subspecies which ranges from Oregon, Idaho, and Wyoming north to northern British Columbia. Here is a sonogram of a Type 1 call I recorded yesterday: 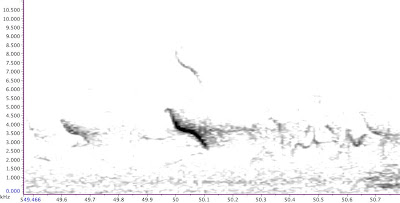 And here is a recording of Type 1 calls from Washington you can listen to:


In my recording yesterday, I was also able to pick out a few examples of Type 4 calls in my recordings, which is typical of C. v. warreni and mapped by Sewell et al. as occurring from about the Uintah Mountains, through Colorado, to northern Arizona and northern New Mexico. Here is a sonogram of one of the Type 4 calls from my yard: 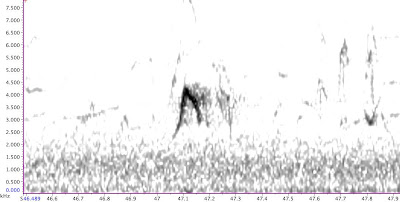 And here are some Type 4 calls from Colorado you can listen to:


Sewall et al. documented both call types 1 and 4 from northwestern Wyoming and southern Colorado. It appears that both call types also occur in northern Utah. More work will have to be done to tell whether this is the result of movement of individuals, intergradation between subspecies, or overlap between reproductively isolated cryptic species.

Ryan O'Donnell
Tempe, Arizona, United States
I am a biologist whose research focuses on birds, amphibians, and reptiles. I started this blog while trying to see 200 bird species in Cache County, Utah in 2008, and it has evolved into an ongoing way for me to share my experiences in nature. This blog focuses on birds, amphibians, and reptiles near my current home in central Arizona but includes other groups of organisms in other places as I encounter them.